He is the national poet  of  Finlandand the author of the lyrics to Maanne , Finland’s national anthem. Runeberg was also involved in the modernization of the Finnish Lutheran hymnal and produced many texts for the new edition.

Runeberg torte (Finnish: Runebergintorttu) is a Finnish  pastry flavored with almonds and arrack or rum and it weighs about 100 grams .Raspberry   jam inside a sugar ring is commonly placed on top of the tart.

The torte  got its name from the Finnish poet Johan Ludvig Runeberg (1804–1877) who, according to legend, enjoyed the torte with punsch  for every breakfast. Runeberg tortes are typically eaten only in Finland and are generally available in stores from the beginning of January to Runeberg’s birthday on February 5. 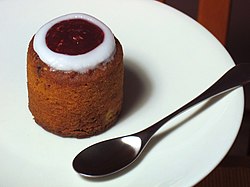 Popular legend says that Runeberg’s wife, Fredrika Runeberg, created the torte. Her recipe book from the 1850s has the torte’s recipe, which is believed to be a variation of an earlier recipe by confectioner Lars Astenius from Porvoo.

Some famous poets or authors have their own anniversary, but not everyone has their own dessert.