On the fifth meeting we decided to actually do some grammar work in German. We used http://mein-deutschbuch.de/  to do some exercises with prepositions. I found this really difficult because they were fill-in exercises. I couldn’t really understand at points what the sentences where meant to be. At points even Daniel was having troubles to understand what was the meaning of the sentences.  After i stopped thinking too much it was easier to go with my instinct and get more things right.

To make the meeting also about Finnish language for Daniel we did some translations. After I had given my answer to a sentence Daniel would either say it’s right or correct me. Then it would be his turn to translate the said sentence to Finnish and I would help him with the grammar and spelling.

I think this was a nice way to combine the actual learning of both languages. And it was very suitable for shorter meeting. Daniel had also brought some Donald Duck pocket books in German for me to read and keep me in touch with German language on my free time. We ended the meeting with going through some of the character names in German, Finnish and English. 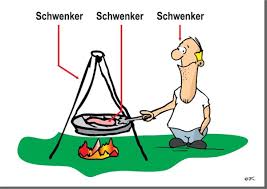 On the third meeting we decided to focus more on my German skills because Daniel already had three hours of Finnish class that day. That’s plenty for a one day.
We both were also tired that day so trying to really study wasn’t an option. We decided to just have conversations in German about my time in Germany, what I missed when I lived there and about things we found funny in the other countries.
For example I couldn’t comprehend the fact that Germany doesn’t really have dips in the same quantity as we Finns have.  It’s the little things that get you sometimes 😀

Then we also talked about one of the most Finnish thing one can do, Sauna. In Germany apparently there’s a lot of rules on what you can and can’t do in the sauna, which i find extremely funny. For example you shouldn’t talk in the Sauna, it should be the place of peace. Alcohol is a definite no no, which is absurd for Finnish people.

Also, there’s this thing called Saunameister. He is a guy or a woman who will make being in the sauna some sort of event.  The saunameister comes into the sauna and throws the water on the stones, nobody else is allowed to do that. After that he takes a towel and whips it around to circulates the steam, “löyly”, around. Then you just sit there and after around  minutes it’s time to go to the shower.

For the second meeting we had decided to pick a song text on the language we want to learn and then in the meeting to translate it. For me it was kinda difficult to find a song in German that i liked and didn’t understand. But then we decided just to pick a song from Rammstein and translate that to English together. Because the song wasn’t too hard to understand we made a list of words that are almost the same in German and Finnish, you only need to ad an “i” in the end. Finnish is that simple 😀

Daniel had picked a classic song with the title Juodaan viinaa. This turned out to be a good practice for both of us. First Daniel translated the text from Finnish to English and after that I translated that to German. With this task I really understood how hard Finnish can be and how much more simpler language English can be compared to Finnish.