Chinese cuisine includes styles originating from the diverse regions of China , as well as from Chinese people in other parts of the world including most Asian nations. The history of Chinese cuisine in China stretches back for thousands of years and has changed from period to period and in each region according to climate, imperial fashions, and local preferences. Over time, techniques and ingredients from the cuisines of other cultures were integrated into the cuisine of the Chinese people due both to imperial expansion and from the trade with nearby regions in pre-modern times, and from Europe and the New World in the modern period. In addition, dairy  is rarely—if ever—used in any recipes in the style. 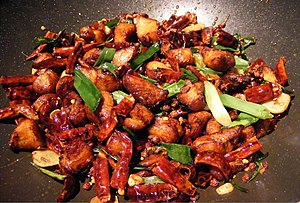 Dumpling is a broad classification for a dish that consists of small pieces of dough, often wrapped around a filling . The dough can be based on  flours , and may be filled with meat and vegetables. And we choose the boiling dumpling.