Our second meeting was by one of my classmates. We were drinking coffee and tea and eating some typical Finnish baked goods such as Karelian pasties and buns. Of course we had also Finnish chocolate: Fazer blue (Fazerin sininen).

We were also baking together a lingonberry pie. The recipe was new also to me. It was really easy and fast to bake the pie and it was really delicious.

We translated the recipe into English and Spanish.

We were talking about some ingredients we used for the pie and wondered if there are similar ones for example in Spain. The pie may be different depending on where you make it and what kind of ingredients you use.

You can try to make the pie and see what kind of you made.

Our first meeting was at the Pyynikki observation tower (Pyynikin näkötorni). We took cup of coffee and a doughnut. The doughnut is said to be the most delicious in whole Tampere. The best or not, anyway it was really delicious, especially with a cup of hot coffee enjoyed in the cafe outside.

Pyynikki area is known about amazing views and as a nice jogging area. It is also known by everyone living in Tampere.

We had a chat together.  We talked about different school systems and our studies. We talked also about the families and different languages.

Finally we climbed up the stairs to see the beautiful view over Tampere. It was a bit windy day and we were almost frozen there up. Anyway it was really nice to meet and spend short time together.

For the fourth meeting, Vera, Viivi and I decided to cook as the brave human been we are. For this time we dediced that I should cook an Spanish omelette, eventhough the esthetic result was not the expected, the taste was great (at leats they told me that).

Finnish people have their very unique way of showing their pride of being Finnish. Unlike other countries we don’t wear Finland flags colors in our clothes etc. We have a more settle way of showing our pride. Here are few things that we are proud of and are happy to show others when talking about Finland.

Oh how much we love the sauna. It’s a place were one can relax on your own or with family and friends and place to catch up on things with them. It is also a place were you are completely naked and present yourself the way you are.

Fazer is a brand Finnish people seem to be proud of even though we don’t talk about it. Frazer is not originally from Finland but it has made it’s way to our hearts. Salmiakki is also popular on top of chocolates and other sweets. We are brought up to like this candy and it’s always fun to see foreigners trying it.

We might not have sun all the time but our nature finds a way to keep our spirit up even though its dark most of the year.  Most of Finland is covered with forest and lakes. Population is also spread quite a bit so there is always quiet place when one can relax.

-Lack of small talk (good in a way that when you meet Finnish people they show their politeness by giving you space and getting to know you in time.)

We met on Friday evening and discussed movies. We hadn’t seen the same ones. That’s why I’ll list my favourites here, if you have some spare time to watch them.

Calendar Girls is a British comedy film from 2003. It is directed by Nigel Cole, with Helen Mirren and Julie Walters playing the main roles. 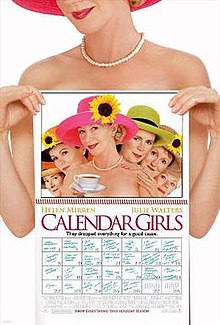 The movie is based on a true story. It takes place in Yorkshire, where a group of women decide to produce a nude calendar to raise money for a local hospital.

This picture was awarded the British Comedy Award for Best Comedy Film.

A Good Year is a British-American comedy-drama film from 2006. It is directed and produced by Ridley Scott. The film stars Russell Crowe and Marion Cappreciate. The film takes place on a vineyard in Provence in south-eastern France.

P.S. I Love You is an American drama film from 2007. It is directed by Richard LaGravenese. The film is based on a novel of the same name by Cecelia Ahern. It stars Hilary Swank and Gerard Butler.

Under the Tuscan Sun is an American romantic comedy drama film from 2003. It is written, produced, and directed by Audrey Wells and starring Diane Lane. It is Based on Frances Mayes’ 1996 memoir of the same name. The film is about a recently divorced writer who buys a villa in Tuscany.

The Best Exotic Marigold Hotel is a British comedy-drama film from 2011. It is directed by John Madden. It is based on the novel These Foolish Things, by Deborah Moggach. The movie features a lot of famous British actors, such as Judi Dench, Celia Imrie, Bill Nighy, Ronald Pickup, Maggie Smith, Tom Wilkinson and Penelope Wilton. They play a group of British pensioners moving to a retirement hotel in India. 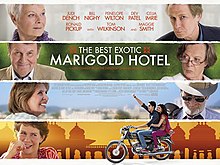 So, these are some of my favourite films I’d recommend to you.

For the tenth meeting either of us actually wanted to do anything too hard or exhausting so we decided to do a recap of the course. We went through what we have learned and done. We also talked about the autumn semester. For both of us it has been quite hectic and it was hard to get our schedules to meet time to time. We both had our uni and homework and our personal lives. I also had a lot of practices in the evening when Daniel would have had time and then when i didn’t have any lectures he would have school from 8 to 16. Considering all of that I think we could work around it quite nicely.

I had a good chance to maintain my German skills and to get over my fear of speaking German. I hope I have been able to help Daniel to learn the Finnish language, culture and way of living 🙂

On the sixth meeting I went through Daniel’s presentation for his Finnish course. It was funny to notice how little I know about Finnish grammar rules. It was at some points impossible to explain why we say something in certain way. “Because it just sounds better” or “it’s easier to pronounce this way” where my most used sentences when asked why some words or sentences are structured that way. I think Daniel knows more about the “why” than I do.

After going through the Finnish homework we started to talk about wildlife in Germany and Finland. We do have a lot of same animals but the ratio of them is so different. We have quite a lot of wolves in Finland but in Germany they have just started migrating back. In Finland it’s common to hear about cars crashing with a moose. But in Germany you are more likely to crash to a deer or a herd of wild boars .  Daniel told me that there’s actually a herd of wild boar in the city of Berlin and they cause nuisance in one of the parks.

Our ninth meeting took place in the Keskustori. We walked through the people and wandered around the Christmas market. We talked about Christmas traditions in our countries.

The main reason for the meeting of course was the independence day’s festivities. We listened to the music and talked about my feelings and Daniel’s knowledge of Finland’s independence. Because Daniel had gone through the independence day vocabulary in his Finnish course we had the conversation in German. The event got a nice ending with the Finlandia hymn and amazing fireworks.

For this meeting we decided to go through some vocabulary I need if I ever want to live and work on my field in Germany. We went through words in German and Finnish that had something to do with forestry. This was a good exercise  for both of us. I got to learn the German words and Daniel got to learn the Finnish words. Here’s some of them:

It was frustrating to notice how little I could remember these forestry words in English. This meeting made me brush up my English vocabulary with the German.

On the seventh meeting I helped Daniel with his Finnish homework. We went through some of the grammatical cases. This was quite hard but a good practice for me because I found it easier in German than in English. I also think it was clearer for Daniel to get to hear the system of the cases in his mother language.

Somehow, we ended up talking about the school systems in Germany and Finland. Explaining the school system in Finland took under five minutes where as the German system has so many possibilities it took almost ten minutes to go through.

After this meeting I’m not blaming myself for not understanding the system while i lived in Germany. Now that I’ve seen it written down I can see how I might have misunderstood some of it. What also makes the system so complex is that different states might have different systems but they still need to be compatible in the national level. Sometimes simple might actually be better, in my opinion 😀