Our last meeting took place yet again, in Lapinkaari. We decided to have our farewells accompanied by comedy so comedy movie it is! Yooree gave us two options, either Korean movie ‘Sunny’ that is a story about old friends or ‘Thieves’ which is basically the same as ocean 11 but better and more colorful. We chose the latter.

The Thieves is a heist movie that mixes together romance, comedy, and tons of action to create a highly enjoyable film with hot, mega stars from HK, China and S. Korea. Also, it was absolutely delightful surprise to see major hottie, Korean actor Kim Soo Hyun as Zampano in the movie. Ooh myyy…

It was so awesome to meet these two great girls! I already knew Yooree because I’m her tutor but still, I am so happy to get close with both of the girls! We’ve already joked that we need to have our next EOTO class in Korea next summer when I come there for my exchange year.

Thanks for the course, it was awesome! 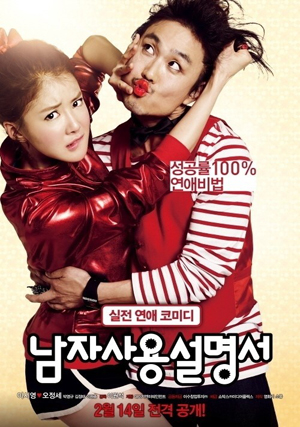 Today we had a movie night! Yooree suggested that we could watch a Korean movie. She picked a romantic comedy called “Male Instruction Manual” (=남자 사용설명서=Namja Sayongseolmyungseo).

I have seen quite a lot of dramas but only couple Korean movies and most of them were murder thrillers, usually with a lot of gang violence and gruesome deaths by hammers and shovels. I was rather happy to see this film because it was funny, weird and nicely directed with great colors! Totally recommended!

Here’s a short description of the movie: “Assistant TV commercial director Choi Bo-Na (Lee Si-Young) is tasked with doing anything and everything at work. Due to working so many hours, her appearance is always a complete mess. Choi Bo-Na also hasn’t dated in years. One day, her company shoots a commercial on location at the beach. Famous actor Lee Seung-Jae (Oh Jung-Se) appears for the filming, but he immediately complains about the tall height of the woman he is shooting the commercial with. Because of this, the whole concept behind the commercial has to be changed. Choi Bo-Na complains about Lee Seung-Jae’s attitude, which makes Lee Seung-Jae dislike her even more. After the filming is complete, Choi Bo-Na finds herself walking alone along the beach. The staff has already left back for Seoul without her. While waking on the beach at night, she comes upon a unique stall. The stall sells various instructional tapes. While she browses through the tapes, the persuasive seller (Park Young-Gyu) appears and talks her into buying a set – a $500 dollar instructional tape set on how to use men with different persuasive acts. The instructional tapes will soon change Choi Bo-Na’s life. “

After that, the girls recommended me some other good comedies such as:

과속스캔들= speedy scandal: “Former teen idol Nam Hyeon-soo (Cha Tae-hyun) is now in his thirties and working as a radio DJ. A young woman named Hwang Jeong-nam (Park Bo-yeong) sent a story to the radio station Hyeon-soo worked at, telling him she is going to meet her father. He finds out that he is the father of Jeong-Nam. Not believing it, he goes through a DNA blood test,and the results say that they’re related. Later on he tries not to create a scandal with what’s happening to Jeong-Nam and himself.”

Sunny: “New high-school transfer student Na-Mi (Shim Eun-Kyeong) comes from a small town in Jeolla Province to her new school in the capital city of Seoul. When she is nervous, her small town dialect comes out & she starts to shake.On her first day at her new school she is bullied by others. Coming to her help is a group of girls. The girls are Choon-Hwa (Kang So-Ra) – known for her strong sense of loyalty & excellant fighting skills, heavyset Jang-Mi (Kim Min-Young) – who badly wishes to have plastic surgery to get double eye-lids, Jin-Hee (Park Jin-Joo) – excellent when it comes to spewing profanity, Geum-Ok (Lee Yeon-Kyung) – interested in literature, Bok-Hee (Kim Seon-Kyeong) – dreams of one day becoming Ms. Korea and Su-Ji (Min Hyo-Rin) – always arrogant. Na-Mi quickly becomes part of their group. When the group confronts rival girls known as Sonyeo Sidae (“Girls Generation”), Na-Mi spews curse words she picked up from her grandmother. Because of Na-Mi the girls are able to avoid a crisis. These seven girls then form their own group named “Sunny”. They also vow to stay together forever. The girls then prepare for a performance at an upcoming school festival, but on the day of their performance a terrible event occurs leading the girls to eventually going their own separate ways. Twenty five years later, Na-Mi (Yoo Ho-Jeong) is married to a successful businessman and has a beautiful daughter. Her life seems perfect from afar, but there’s something lacking in her life. One day, Na-Mi bumps into high school friend Choon-Hwa (Jin Hee-Kyung) in the hospital. They are ecstatic to see each other, but Na-Mi receives a phone call and has to leave. On her way out she ask Choon-Hwa if there is anything she can do for her. Choon-Hwa at first says no, but after a moment of reflection she makes a simple request to Na-Mi. Choon-Hwa asks Na-Mi to find the other members of “Sunny,” so she can see them one more time …”

That was a nice meeting. We decided to watch a Finnish Movie together. So first, we went to Makuuni and rent the movie called Elokuu, in Chinese it’s 八月=Bā yuè, meaning of August. But before get to Julia house we also bought some Candiess!! Honestly, before came to Finland I am not really a “Candy person”, but after I came here, I will say I definitely change and become a super “Candy person”! The candies is just super here! (also Chips hehe). Oh ya we also bought some glögi and chips in Sokos (I am also glögi super fans!) (Well I will say I like most of the Finnish food x) ).

So, back to the movie, it was nice, even the ending is a bit sudden and weird. I enjoy the time spends with les girls. During enjoying the movie we also talked something about our different culture things. I was quite surprise when heard Julia and Paapi said they think Chinese peoples’ life are more relax than European people, for me, that’s totally opposite! I will say for most of the Asian people, we will think that people live in European countries are more relax and enjoying life, at least that’s what I and my family think. The girls also said during their exchange in Beijing, China, they always saw people wearing pajamas in the shopping complex, that’s really a little bit weird! But the local people there think that’s totally normal! Well I saw some in Malaysia but only the kids, not the adults.

There are all new for me and it’s good to learn something new from them! Hope to see the girls very soon in the next meeting! 😉